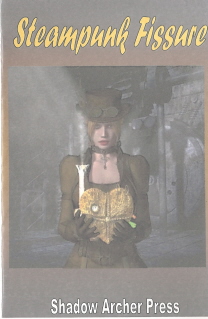 Features six authors who appeared on writers and publishers panels at the Upstate Steampunk Extravaganza Con in Greenville, SC, Nov. 19th and 20th.

Take a step into this mechanical , sometimes diabolical world, fraught with clockwork tensions and alchemical experiments.  Whether you fly on
airships or board steam trains, you’ll be drawn into mysteries, high
adventures, back alley intrigues and fragile loves. Prepare to encounter
a host of characters, both strange and bizarre, who will tease, amaze,
and inspire as they lure you into these altered worlds of the once was
and could have been.  Mad scientists and airship captains, baleful
ladies, Egyptologists and their finds, tinkerers, spies, mechanical
beings, and lost souls. Steampunk Fissure carries of a broad section of
this exciting genre, nodding from time to time to steampunk influences
and branching out in odd new directions.

Permalink Reply by Curtis Hart on November 24, 2010 at 10:12am
This was an awesome issue Gail, it was filled with content that kept me from putting it down until I had read every word.

Permalink Reply by Lia Keyes on December 7, 2010 at 9:11pm
I really enjoyed my copy of Steampunk Fissure (though the staples came apart - might want to try better ones). Feel free to add links to our Facebook page for SEO friendly exposure at http://facebook.com/SWAGpage