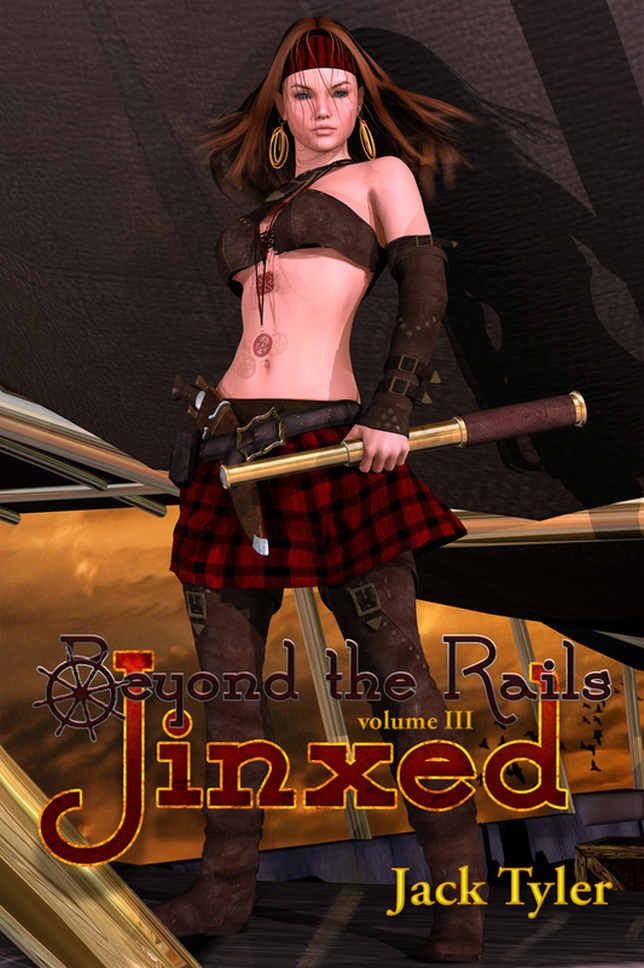 I first introduced Cloud Runner in September of last year, but the actual work was created almost two years ago. Over time, many people have expressed enjoying the piece, but Jack Tyler (AKA: Blimprider), one of my  fellow-members on Steampunk Empire, took it one step further ...
Jack was inspired to expand upon a passing character in volume I of his Beyond the Rails series (part of The Blimprider Chronicles), and focus an entire volume on the exploits of Abigail 'Jinx' Jenkins; a woman of "ambiguous morals," whose "motivations are less than clear." Jack plans to take his character and readers, "on the ride of a lifetime." So from this day on, the Cloud Runner is also to be known as Jinxed.
Jack sent me a mini-blurb to post until the final blurb is ready. The final blurb will be on the Jinxed page on my website for those reading this in the future.
mini-blurb:
Life in the African colonies was a difficult proposition in 1884, and the crew of the Kestrel had long faced a dangerous life on the far edge of the harsh environment. They could little imagine how much more dangerous it would become when an old acquaintance returns with an unbelievable story.
I also had fun creating Jack's logo for his writing. It will appear in one of four formats in, on, and in relation to his writing. I had fun with them, too. I can safely say my most-fun logo creations to date. I created six variations for his business use, three in color and three in b/w:

Keep an eye out for this series. Plans to release volume II before Christmas and volume III next summer promised to keep us entertained for quite some time. :D
Start the adventure with volume I ...
Beyond the Rails: Six tales of steampunk adventure on the African f...

Jack Tyler can be found hanging out at S.W.A.G. & SPE:

Onto wrapping up the next book :D
Until next time ...
Aidana WillowRaven

*Blurbs and quotes provided are not edited by WillowRaven, but posted as provided by author/publisher.

Love the artwork! This sounds excellent, I'll definitely keep an eye out for it.