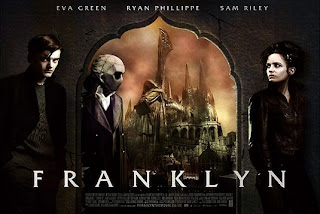 I came across Franklyn, a unique, original and low publicized 2009 film by accident and I'm glad I did. This visually articulate movie, directed by Gerald McMorrow, has the feel of a well planned imagist's  journey, something akin to the innovative style of Alex Pyros. Franklyn falls out of any known genre, for the way the story line tugs at your synapses in a shifting collage/montage style reminiscent of  Stay and The Fountain.
In Franklyn, two alternative realities offer  a mind-tripping head game, sometimes a test, of whether you're following it along, gathering the symbols, assessing the subtle but important threads of the philosophy of cultures, humanity and civilization. However, it's not heavy handed, just highly intriguing and entertaining in a dark way.
Franklyn takes place in two alternative realities. One of them, Meanwhile City, is tragically and beautifully bizarre and dystopian, with breathtaking landscapes highlighting the sublime sacredness in decay. In contrast to the beauty of of the city, it's citizens have fallen into a trampled culture thanks to the government which mandates each citizen must have some sort of religion. The religions are odd and faked, even silly, but no matter the styles, one character, the oft-times masked Jonathan  Preest played by James Morrow, cannot abide the rules and struggles against the enforcers, a contingency of dressed-alike weirdos which clock in somewhere between the contrasting figures from Clockwork Orange and the steampunk ilk.
This cinematography is used as a tool to separate the contemporary London storyline which focuses on a poignant, disturbed jilted young man, Milo (Sam Riley) and a lovely depressed goth art student; Emillia, (Eva Green). As grim as it is, the visually stunning cinematography of the alternate world, Meanwhile City, is a place I believe most steampunkers would want to wander, simply for the influence of beauty found in decay and lost civilizations. The two story lines cut into each other in a highly provocative style, style, forcing you not only to wonder, but to think.  Slender paths and parallels  are offered for the viewer to untangle as they're drawn deeper and deeper in a dark, disturbing landscape.
Franklyn is a dark subculture urban fantasy not in the style, but in the coloration and mood of movies like The Crow and Dark City and its commentary on current society, one felt by many folks in the steampunk genre, is subtle yet present throughout.