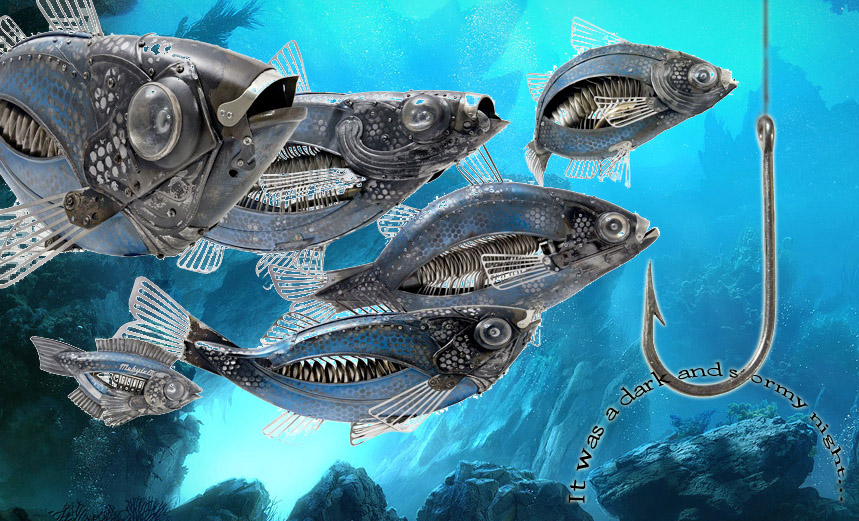 Hooks, for those of you who don't write, are the bits at the beginning of a book designed to reel in a prospective reader, agent or editor. If you've ever picked up a book in the store, read the first page and decided on the spot that you had to buy that book you've experienced a well written hook.

Since I've been getting into the querying process I've been thinking a lot about hooks lately. Because Aetherstorm has a prologue I need to have two solid hooks, one for the prologue and one for chapter 1. The way I see it there are as many hooks as there are writers, but the ones that work well fall into a few categories.

1) Action: Think about any James Bond movie. I think action hooks work really well for movies but don't work so well in print. They are commonly used though, I'd have to say this is the most frequently used hook technique I've seen while critiquing manuscripts from other aspiring authors.

2) Character: Catch 22 starts with a great character/funny opening. Yossarian is just sitting in the hospital, censoring mail from the enlisted men, but because he's bored he plays games with the mail he censors. It really gets you inside his head and rooting for him before you're done the first few pages. You care about him and want to know where he's going.

3) Mystery/suspense: A woman wakes up to a creak from downstairs. Was it the cat? The house settling? Or an intruder? Very effective hook, as long as the reader is asking the right questions and it doesn't feel contrived.

4) Shock value: Many horror genre movies and TV shows like Criminal Minds use this hook. Two young boys are fishing on a public dock, one turns to stare, goggle-eyed at the water. The other follows his gaze and proceeds to vomit. Camera turns to show their POV and we see a bloated corpse rocking gently on the waves. Effective but risks turning some readers off.

5) Comedy: Get the audience laughing and they will flip pages. Comedy is tricky though, you need a deft touch or you risk falling flat on your face.

Of course the best hooks use multiple devices. My prologue starts with character/suspense, then moves on to character/shock value. Chapter 1 starts with suspense which builds with some shock value to heighten tension, then a major shock, the lead turns and flees and things transition into an action sequence.

I am sure I have missed at least a few good devices for hooking an audience. What about your experience? What are some of your favourite hooks?

This article was republished with kind permission from Mark Fenger. Read more like this at Mark's blog.

Comment by Lia Keyes on June 14, 2011 at 9:57am
Thanks for this informative post on hooks, Mark. So valuable. I particularly liked the reminder that if one chooses to use a prologue, then both the prologue and the first chapter need their own hooks. This list of different types of hooks gets the creative thought engine turning over, too!