After watching Laputa, Howl's Moving Castle, and Steamboy, after finishing Fullmetal Alchemist and catching up with the latest release of D. Gray-Man, I find myself asking, "What else?"

It is evident that I deal exclusively with mangas in this post. This is because while steampunk has been recognized as a hybrid genre that is versatile and multicultural, there is a rather blatant oversight of mangas and animes in spite of the astounding popularity and appeal of Howl's Moving Castle and Laputa.

Really, what else? It's too easy to cite Hayao Miyazaki's works as the epitome of steampunk aesthetics and we are deeply indebted to the great master for his contribution or even artistic guidance, but as a genre, a culture and a community, steampunk cannot remain so narrowly defined.

So here I am. There are probably readers out there who are going to respond with outrage and indignation with one-liners such as "That is not steampunk!" or "This is irrelevant. NEXT!" Yes, the works I am going to mention are not steampunk, but they should be included in this on-going dialogue of steampunk aesthetics and principles, some because they offer new ideas and insights into modernity and progress, others because they are beautiful and draw inspiration from Victorian fashion while modifying them with contemporary sensibilities. In other words, they are steampunk-ish/-like, but I hesitate to classify them as 'steampunk' but if you are able to welcome them with open arms then I propose for a round of applause for these newcomers. 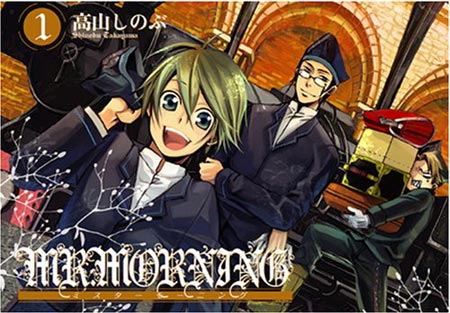 In Mr. Morning you follow Toky Towy as he becomes an apprentice on board the transcontinental train--the Rainbow Stone Train. I almost used 'steam train' but I'm glad I didn't, because instead of coals or steam the train runs on the eco-friendly rainbow stone. This manga is set on the verge of technological progress at which point the world is coming to learn the benefits and advantages of using electricity for power, foregrounding the various whimsical antics that the characters get up to as they interact with the passengers. The train is split into three sections: Morning for the lowest-class passengers, Afternoon for the middle-class, and Evening for the upper-class, so naturally there is a little class tension, otherwise this is a sweet slice-of-life manga that is easy and fun to read.

This? This is the creepy, gothic one with awesome fight scenes. On the one side, you have cute but dangerous clockwork toys that attack humans, and on the other, you have renegade sentient dolls that have special fighting abilities, working together as a secret organization to overthrow their maker. The abilities of the dolls are inspired by their namesakes. For example, the Puppet doll needs a human puppeteer in order to fully function as a warlock, while the Scapegoat doll can transfer the pains and injuries of its human master onto itself. A doll needs its master, and yet they are working together against their maker?! It doesn't get more Frankensteinian than that.

#3 The Time Eliminator by Tomozo Kaoru

Now, this is the one that I want to read but haven't been able to get around to it. The idea is that there is the office of the Time Eliminator, an office allows the holder to travel through time and eliminate events that happened in the past. The first case that Rex, the man who is the current Time Eliminator, is given deals with the infamous Jack the Ripper case. He has to solve the mystery, find the murderer, and use this opportunity to uncover a rare Babylonian artifact that might be sustaining a curse that has been placed on the descendents of Fred Abberline, one of the detectives who failed to solve the Jack the Ripper case. I'll have more to say once I hunt down this series, and if you manage to do so before I do, let me know what you think!

This is all for now. I still need to get back to reading about Bakhtin's theory of heteroglossia (Eek!), but for next time I will have three more manga recommendations---for the girls! I'm not saying that this post includes mangas for boys only, but rather in my next post the mangas will deal primarily with fashion and romance. :)