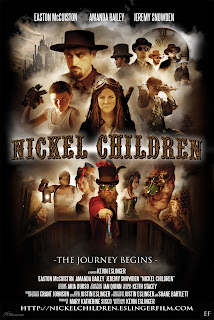 Written and directed by Kevin Eslinger, Nickel Children is the first in a new Steampunk series set in a surreal environment that is an alchemy of H.G. Wells and Deadwood.

Eslinger's confidant direction brings to bear a fully-developed alternate universe  that is underscored by Keith Stacey's spare yet haunting soundtrack, and the gorgeous cinematography of Justin Eslinger.

In the opening scene, it is 1885 in the Kansas dust bowl and Jack, (talented newcomer Easton Lee McCuiston) watches his father's murder by sinister sheriff, (Jeremy Snowden), and his lackeys, who kidnap, then throw the boy into a Dickensian dungeon, filled with other desperate children.

The girls are forced into prostitution and the boys must fight each other to the death, for the entertainment of the amoral society that inhabits this dark and exquisitely fleshed-out world, serving to raise awareness to the horrific epidemic of child-trafficking, today. 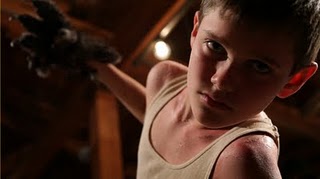 Conveying Jack's grief, fear and confusion with a maturity beyond his years, McCuiston says even more with his soulful eyes than his words. 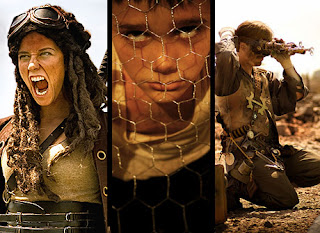 When the camera turns on Anastasia, (Amanda Bailey), we know immediately that she is not of that dark world – rather she is there on a mission which proves to be the underlying theme of the Nickel Children series. The mysterious Anastasia is at once vulnerable and formidable. We want to know who she is and where she came from. As we watch a tiny connection spark between Jack and Anastasia, we hope that she will save him, for it is obvious that she is a warrior.

As the story concludes we are left with a sense of hope and a definite longing for more. There are more questions than answers and I for one, will be looking forward to the next installment of Nickel Children to satisfy my curious connection to these renegade outsiders and their quest for justice in an unjust world. With over 25,000 viewings on YouTube it is clear that I am not alone.

Be sure to check out this exciting new piece of Steampunk filmmaking, and remember - be well and stay curious!

This looks really good, thanks for sharing :)