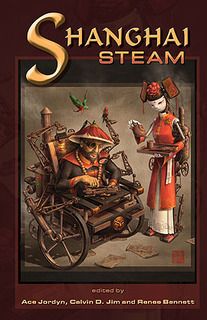 From ancient China to a future Mars, from the British Empire to the Old West, 19 authors show you worlds with alcoholfuelled dragons, philosophical automatons, and Qi-powered machines both wondrous and strange in tales of vengeance, paper lantern revolutions and flying monks.

Shanghai Steam is a unique mashup of steampunk and the Chinese literary genre known as Wuxia (loosely translated as martial hero).

Very excited. Yep, that's the description of my current state of mind. I can finally announce that Shanghai Steam - an anthology of Steampunk/Wuxia stories is going to be published... and NOT just the anthology... but my story as well...

If you read the summary above, they've included a little nod to my plot, but I'm not telling you which one... you'll just have to read it for yourselves.