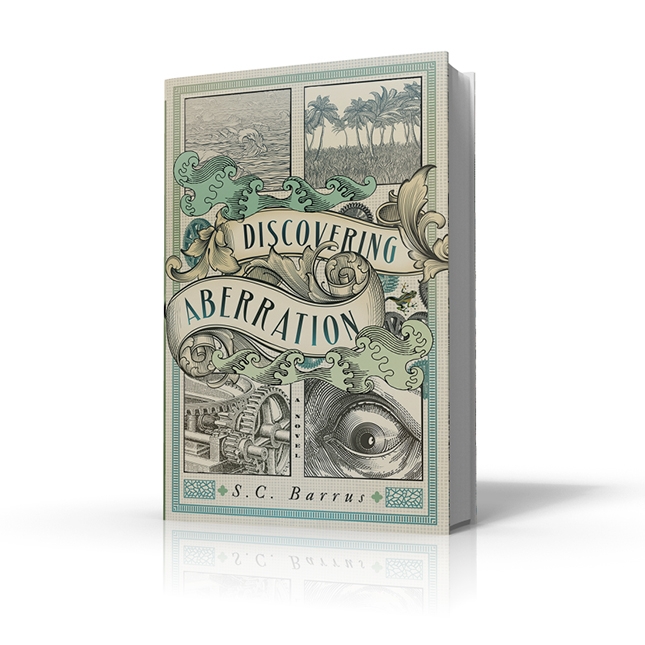 Seattle, WA–An ancient map stolen. A lost civilization discovered. A terrible secret unleashed. Discovering Aberration, the upcoming steampunk novel by indie author S.C. Barrus and published by Away and Away Publishing, is available now for pre-order.

Set in an alternate Victorian era, Discovering Aberration follows Freddy Fitzgerald, a rebellious writer and ex-scuttler, and Thaddeus Lumpen, a desperate archaeologist with a slew of dangerous rivals. Together they will stop at nothing to make the discovery of a lifetime. But their island destination hides it’s own dark secrets which can push even the strongest minds into madness.

Readers have praised Barrus’ past work on Amazon and Goodreads. Author Alexandra Lanc said of Barrus, “[S.C. Barrus] does an amazing job with character development and description, with a writing style that reminds me of Edgar Allan Poe. And though this is a dark story, it has a sense of nostalgia and humor to it, set in an era that gives off a noir flare.”

Imbued with the spirit independent literature, Discovering Aberration has already had quite the journey on it’s road to publication. Utilizing the power of crowdfunding through Kickstarter, Barrus raised $3,783 to offset the costs of editing and design. Six months later, the novel is about to see the light of day.

Set to be released on January 20th of next year, readers can pre-order a digital copy of Discovering Aberration at the reduced price of $0.99 from major ebook retailers Barnes & Noble, Kobo, and iTune Bookstore. Upon release, it will be available as an ebook and in paperback in all major online bookstores.

For more information or for press inquiries, please contact S.C. Barrus by phone (425) 209-5280 or email scbarrus@awayandaway.com. Learn more about S.C. Barrus at AwayAndAway.com.