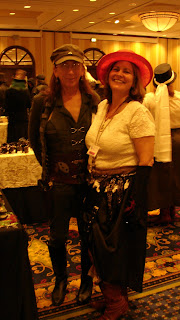 This may be a long blog, or a serialized blog due to all of the amazing experiences at the Upstate Steampunk Extravaganza.
The first run of Steampunk Fissure sold out shortly after noon on Saturday. We're printing another run now. Steampunk Fissure had six
authors scattered across four writer's panels: Gyspsey Teague and Matt
Delman were both featured in their own panels on Steampunk, K.G. McAbee
co-chaired a panel with her writing partner, and Brian K. Ladd, Matt
Delman, Shane McElveen and Maxwell Cyn presented on the authors and
publishers panel. What a feat. Feedback has been coming in from the
panels and Curtis Hart of Florence, SC said of authors panel, "It was
the best writers' panel I've ever been to, and that includes those at
Dragon Con."

For a short overview, I can only describe it as an elegant event – finally a con which blends the academic and the fan approach, from literature to
history, technology to costume, music to the maker’s DYI ingenuity.
Upstate Steampunk Extravaganza was a whirlwind journey through the
alternate worlds. Set in an aesthetically stunning location, every
attendee offered their own version of steampunk in every aspect. I was
constantly inspired, in awe, and caught up in this complex genre. And
the entire weekend, meticulously planned with a full range of vendors,
panels and fun, was punctuated by those caught up in the energy, who
spontaneously erupted into performances, duels, dancing and song.
Thanks to everyone involved for an unforgettable, enlightening journey!
A longer account with photos and highlights coming - I'm still processing it all.