The men and women of Victorian England were one of the most sustainable generations in British history.

Surprising statement, huh? Especially because we equate the Victorian Era with choking smog and dank city streets rife with poverty and waste. Or at least that's what much popular media has shown us of the Victorian Age in Britain.

What's closer to the truth is that social historians have a hard time finding examples of Victorian clothing because the fine dress of an upper class British woman might be passed down to the maid when the lady was done with it. Then the maid wore it for awhile, and then sell the dress at a second-hand shop or pass it down to her daughter. The next level would then use the dress until it fell to pieces. Then they'd either convert the dress into a duster or sell it to a rag-and-bone man who might sell it to a paper-maker to turn into paper. 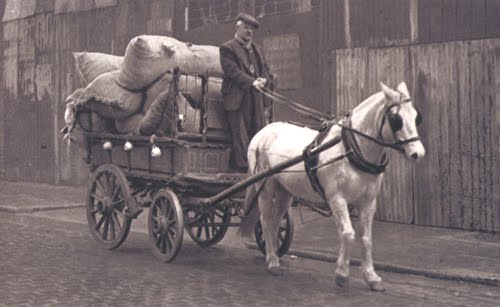 Take a look at a piece of good quality paper from the Victorian Era and you can probably still see the ink in perfect condition. Paper made from rags doesn't shrivel and decompose the same way paper made from wood pulp does. But of course the contemporary way of making paper is a whole heckuva lot cheaper than making paper from rag content was. Especially because you needed a consistent supply of rags in order to make the paper.

Rags were also used as backing for rugs, or even to make the rugs themselves according to a Birmingham Post article from 2008. The Post interviewed Traci Dix-Williams, manager of the Blists Hill Victorian Town in Ironbridge, Telford. To say the least, Ms. Dix-Williams enumerated a whole mess of ways the Victorians reused materials. Here's a smattering:

“Items made of glass and metals were returned to merchants and ash was turned into building material.”

"... a Victorian kettle with a leak would be resealed, thinning bedsheets would be sides-to-middled, worn collars and cuffs turned, and old coats and trousers which were threadbare transformed into rag rugs.

“People would go to bakers and brewers, begging for old sacks to form the backing for the rugs, which were made from short inch-wide strips of material.

“The brewers in turn would buy old clothes and wool which they dug into hop fields to improve the quality of the beer.”


And we think the 21st Century is the age of recycling!

Henry Mayhew, who writes about the Dustmen of London in his work London Labour and the London Poor, talks about the collection of chimney ash and the dust swept out from homes across the city. According to Mayhew:


The dust thus collected is used for two purposes, (1) as a manure for land of a peculiar quality; and (2) for making bricks. The fine portion of the house-dust called "soil," and separated from the "brieze," or coarser portion, by sifting, is found to be peculiarly fitted for what is called breaking up a marshy heathy soil at its first cultivation, owing not only to the dry nature of the dust, but to its possessing in an eminent degree a highly separating quality, almost, if not quite, equal to sand...The finer dust is also used to mix with the clay for making bricks, and barge-loads are continually shipped off for this purpose.


Ms. Dix-Williams had also mentioned in the Birmingham Post article that a layer of dust would be put between the inner sole and outer sole of a boot so as to make it more comfortable. So there you have at least two industries that need dust -- cobblers and brick-makers.

Thrift was a way of life in Victorian England, and one that the Victorians became quite good at. They had to, seeing as the average Victorian man's salary barely covered rent and food. They had nothing even approaching a disposable income or the types of credit cards that the Western republics exist on today. If you lived in Victorian England, then you made darn sure you used what you had until it fell apart. Now that's a recycling program.

Comment by Gail Gray on January 22, 2011 at 5:44am
This is a remarkable reminder!  As a child in the 50's with a mother from London, living in a textile town in New England, we made frequent trips to deliver old clothing to the rag man (by then for us, it was buttonless, torn or horribly stained and my younger sister had already worn it too.  I also made rag rugs, (still use them after almost 40 years) and patchwork quilts (which are full of memories of the clothing I wore as a child and teenager).  When my mom was mad at me she'd call me a rag a muffin and threaten to leave me to work with the rag man.  Part of this may still have filtered down from Victorian England (she was born in 1926) or may have come from a need for such practices during the Blitz in World War II.  One of my mother's favorite terms was "Use it up."  which meant use it until it fell apart.

Comment by Lia Keyes on January 25, 2011 at 8:56pm
Gail, I think the World Wars kept Victorian frugality alive, definitely. My mother spoke of only being able to have an orange once a year, at Christmas. We have an embarrassment of riches these days, and really don't appreciate how fortunate we are!